This time next week I will be in the Finger Lakes wine region of New York State, joining 30 other wine folks, all wine bloggers and/or their significant others.  The reason, TasteCamp, the purpose explore a lesser known wine region. You may remember last year TasteCamp East was in Long Island, New York and both Megan and I had a fabulous time learning about a new wine region, to us, so much so we went back at the end of ’09.  This year I’ll be flying solo, without my partner in crime, as being pregnant has thwarted her wine tasting!

In case you don’t know about TasteCamp, here is a primer from the TasteCamp website…

“The concept for TasteCamp is a simple one: getting enthusiastic journalists and bloggers together in a region that is new to them to taste as much wine as possible and speak to as many winemakers as possible over the course of a weekend.

Most smaller, lesser-known wine regions in the world would love to get their wines in front new audiences, it can be a challenge.  With TasteCamp, the new audience comes to them.

This is not a junket — attendees pay their own travel expenses — including for their hotel rooms — and meals.  Through generous sponsors, some meals may be deeply discounted.

TasteCamp EAST 2010 will take place in the Finger Lakes wine region of New York State from May 7-9.”

I’m looking forward to seeing some old wine blogger friends as well as meeting new ones, and building relationships with a region I know little about. Keep it here for the action as I will try and post as much as I can while I’m there and then full recaps once I get home. I would like to thank all of the sponsors up front for what I’m sure will be a great event. Thanks also to Lenn Thompson and Evan Dawson for organizing this years event.

After the third and final session at the Drink Local Wine Conference we huddled into an adjacent conference room for the Virginia Wine Twitter Taste Off. With an InFocus projector displaying Twitter feeds from the #dlwva & dlwmd hash tags, Virginia and Maryland wineries were poised to present one white and one red wine in this fast paced Social Media showdown.  Well it wasn’t that fast paced, although I hadn’t finished all of the wines by the time we needed to submit our ballots for best red, white, media and consumer wines.  So I guess is better to say that it was fast paced but I wasn’t! 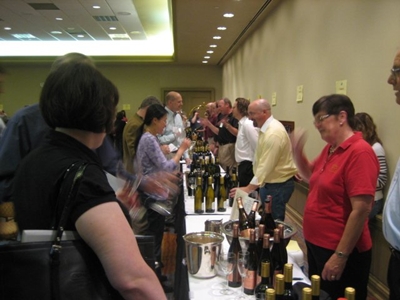 A lot of my favorite players were in the room including Breaux Vineyards, Pollak Vineyards, King Family, Jefferson Vineyards, Corcoran, and Michael Shaps.  The goal of this was to taste through the wines, tweet about them as you go along and in the end vote for your best. Fun concept!

I started with Tarara Winery, one that I have never been to, but have heard a lot about from fellow bloggers.  Jordan Harris, winemaker at Tarara was on premise to pour his wines and I started with his ’08 Chardonnay. It admittedly wasn’t my style, a bit oak dominated on the nose and front of the palate, but luckily it had plenty of great fruit to go along with it. Next I tried Jordan’s Syrah, a variety that you don’t see too much in VA but is starting to pop up here and there. The Tarara Syrah is done in the Cote-Rotie style, co-fermented with Viognier, I can’t remember the the percentage.  I was very impressed, it was full bodied with lots of dark fruit, and meaty notes with hints of classic Syrah green olive. As much as I liked it I don’t know if I liked $50 worth. Although it was an excellent effort for a non-typical variety in Virginia, $50 is a pretty steep pricetag, in my opinion.

I bounced around the tables a bit, catching up with my friends in the VA wine industry and re-tasting through some of the wines I’ve sampled in recent months.  I made my way over to Breaux Vineyards to taste their ’02 Merlot Reserve and their ’08 Viognier. Trying the latter first, it was a classic VA Viognier with beautiful honeysuckle and apricot notes with a crisp dry finish. Not be a huge Merlot fan, I was impressed with the ’02 Reserve Merlot, and voted for it as the best red wine.  It was dominated with layers of black cherry, plum, leather and hints of mocha. For being 8 years old the structure was still there and presented lively yet smooth tannins.

A few Rose’s were poured but I think the best effort went to the ’09 version Boxwood Winery. Made from Cabernet Franc it reminded me of classic French styles of dry Rose, although made from different grapes. Beautifully clean and crisp with light notes of strawberry, watermelon and hints of minerality and a bone dry finish.

In addition to the Syrah from Tarara the other most interesting variety that was poured was the 2008 Albarino from Chrysalis Vineyards, yes an Albarino.  I thought it was a very nice wine, but stylistically was a bit off from classic versions for the Rias Baixas region of Spain.  Tasted a bit too rich, closer for me to another native Spanish grape, Godello, or even a light Viognier with hints of honey that I was picking up.  It was a good wine don’t get me wrong, and I’m happy to see different grape varieties being tried in Virginia. It was obviously a crowd favorite as it won for best white wine of the day.

The white wine that I voted for was the ’09 Viognier from Pollak Vineyards, a wine that I’ve been following since it was a baby. I tasted this wine out of the tank not long after harvest last October and was as impressed then as I am now. Although still a young wine, it was showing classic flavors and aromas of honey, peach, Asian pear and apricot with the addition of floral notes. Lusciously rich with a refreshing backbone of acidity, the ’09 Viognier will be even better in 6 month to a year.

Thanks to the organizers of the events and to all the wineries that came out and poured for us.