Wine Blogging Wednesday #61- “At The Source” with Narmada Winery

This months Wine Blogging Wednesday is hosted by the founder of WBW, Lenn Thompson of the blog “The New York Cork Report.” His topic for this month was to taste and or purchase a wine at the source rather than at your local wine shop, and you get bonus points for tasting with the winemaker.

This was perfect timing for me because this month I had several trips out to Virginia Wine country planned. One in particular was to a brand new winery, Narmada, who’s owners I met at a winery in Santa Cruz, California last year. That’s right I first met Sudha and Pandit Patil (owners) while tasting at Testarossa winery in California last November. The Patil’s kept my information and emailed me a couple of weeks ago to let me know that their new winery was opening soon and wanted me to come out try what they had. 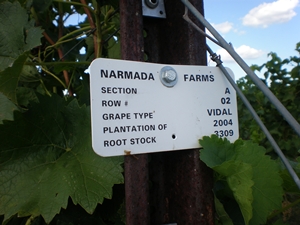 The property that Narmada resides on was purchased in 1999 and the first grapes, 2 acres of Vidal Blanc, were planted in 2004. In 2005 additional grapes were planted, 3 acres of Chambourcin, 2.5 acres of Chardonelle and 1.5 acres of Traminette. Until this past vintage the grapes had been sold off but in 2008 they produced 44 tons of grapes to go into their first official bottlings. Also planted in 2008 were acreage of Vinifera varieties Cab Franc and Viognier. The winery is still under construction, so the tastings are currently being done in a beautiful pavilion next to the pond on their property. Narmada had a soft opening on Labor Day weekend and is currently open Fri., Sat. and Sun., but will have an official grand opening in November.

2008 “Mom” Chardonelle – aromas of honey and corn pudding, with flavors of cardamom, apple, honey and white pepper. Full bodied. – one of the few Chardonelles I have enjoyed

2008 “Midnight” Chambourcin (<1% RS) – aromas of cardamom, baking spices and smoky cherry. Flavors were similar but added cranberry and raspberry. Medium to full body, no detectable sweetness. – one of the few Chambourcins I have enjoyed.

We also got taste a couple of wines that aren’t yet released, only because Narmada is waiting on TTB approval of the labels.

For such a young winery I was very impressed with the offerings, especially the hybrid varieties that I am not usually a fan of. In addition to Pandit, who handles the vineyard management and Sudha who helps with wine making and lab duties, they have brought on Rob Cox as winemaker. Rob was formally of The Winery at La Grange and adds some great regional expertise to the Narmada team.

Check back later in the year when I can get back up to take pictures of the completed winery.