A couple weekends ago, Gary York from Enoteca Sogno invited us to his holiday open house and wine tasting. We went of course, I mean come on, great Italian wine and food who wouldn’t!

Two of our favorite appetizers were out to share, the crostini with white beans & arugula and the roasted red peppers & fresh mozzarella along with 4 or 5 great cheeses. 11 wines were out for us to serve ourselves with that Gary had ordered in a nice progression that we followed. It was quite relaxing, and a great way to spend a Sunday evening. Plenty of table space for you to take your glass of wine, grab some apps, and sit down and discuss the wines.

2006 Cantele Primitivo (Puglia) $13 – blackberry, plum and suede on the nose followed by a hint of cabbage, cranberry and cherry. Good long finish. 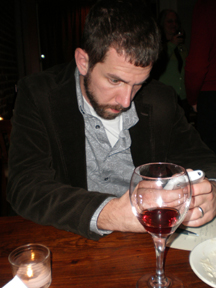 2003 Guido Porro Barolo Vigna Santa Caterina (Piedmont) $36 – very “rustic” in nature, raspberry, leather and cooked greens on the nose with similar flavors laced with a hint of bacon and red currant. BIG tannins, needs a couple more years or some time in the decanter

We had a great line up as you can see and thus a fabulous time as always. The prices next to the bottle names are all retail. In case you didn’t know (I didn’t) Gary sells all the wine on his wine list at pretty amazing prices. There aren’t too many places in town, especially restaurants, that you can get a great Barolo for under $40.

Make sure to keep an eye out over on Grove Avenue for Gary’s newest restaurant Coast which he “hopes” to have open in a few weeks.