I received this wine for my birthday back in May from my buddy Mike and his fiancée Bobbi. Mike and Bobbi are huge Malbec fans, so I knew this had to be a winner.

A bit of background on the wine –

2004 was a good year for Malbec in Argentina, and rated up there with 2002 and 2003 that were considered excellent vintages for the region. 2004 saw fantastic weather for the majority of the season, although there was some late season rain, the crop was harvested under favorable conditions.

This wine was made from 100% Malbec grapes that are harvested by hand from vineyards in Las Barrancas, Maipu, Mendoza. After fermentation the 100% of this Reserve Malbec is aged in French Oak barrels for 12 months compared to only 30% of the non-reserve which is aged only 10 months. After barrel maturation, it is allowed to age in the bottle for an additional 6 months prior to release. 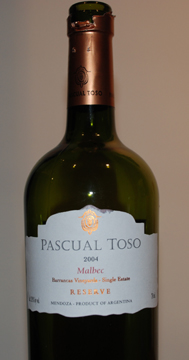 Finish – Nice and long with a lot of cherry flavors, good grip and slightly spicy

This is an excellent wine and a great value, especially if you get it for free, or if you pay for it. I think it retails for around $13.00.  This Malbec had a nice complex nose, with jammy dark fruit flavors and a long gripping finish.  Give it a try, I think it is pretty well distributed – about 4000 cases are made of the Reserve